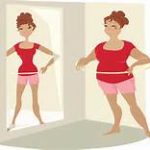 Today I put my psychologist hat on to discuss body image and perception of self. Many years ago, I worked as a therapist in an eating disorders clinic. Often, I would listen to the patients as they discussed their self image and perception of themselves and think to myself, “I sorta think like that too.” At times it appeared their thoughts were similar to my own. They often perceived a large person in the mirror that was in reality not there and then made choices because of this misconception. I just hated looking in the mirror and choose to deny my problems, the same coin just different sides. I knew there was a big person in the mirror. Thing is, I don’t think my perception of self was correct back then. I don’t think I saw what was in the mirror (when I did look) accurately either.

Recently, I was looking at family photos, some taken 7 or more years ago. I almost don’t recognize the women in those photos. I think to myself, “wow, was I really that big?” Thinking back to those days, I think at the time I certainly marginalized the problem. I felt my diet was okay and I dida little exercise, so I thought my weight just wasn’t all my fault. I think now that is one of the many reasons I remained over weight for so many years. I just didn’t think it was that bad or all my fault. Sounds crazy right, but for me, my mind minimized the problem. So how did this happen to me or anyone else who has the same thinking?

For many of us, our body image and our weight are largely influenced by the comparisons we make of ourselves to other people. There are two ways this can happen, both of which can be detrimental to our self perception. First, some of us consider our bodies are either healthy or overweight by comparing ourselves to an “ideal.” Perhaps this comes from media, TV or magazines. However, the images that are considered “ideal” are digitally altered and photo shopped to meet that ideal, which actually doesn’t give an accurate example of what a healthy person should really look like.

Secondly, some of us compare ourselves to our neighbors, office companions or people we meet in the street. However, more than two-thirds of these people are considered over-weight or worse obese, based on body fat percentage. If you compare yourself to the majority, you may think of yourself as “not that bad.” So now we have a faulty image of what is healthy when it comes to our own body image because of these comparisons. Then without the proper template for comparison, we use “excuses” or in psychology we call them defense mechanisms to protect ourselves from the ugly truth.

First there is denial, this is the inability to face reality. If you are overweight, you may say things like, “It’s not that bad,” “It’s water retention,” or worse like me, “I’m not that big.” The second defense mechanism is rationalization. This alters perception of reality by creating a reasonable explanation for a situation. So you may say something like, “I’m just big boned,’ “I am too busy to go to the gym,” or perhaps there is some “thing” that is preventing you from losing weight. Believe me I have made some of these statements and I am sure a few other creative ones over the years. For me, not looking in the mirror and not getting on the scale was how I continued to deny my weight problem was out of control. I would use crazy excuses to explain why I wouldn’t weight myself. Then I would compare myself to other people, often rationalizing that my weight was not that bad. Or exclaim, “but I don’t eat that bad!”

I have used both defense mechanisms. But I still think there is something more than denial and rationalization, it is the distorted image I have in my head of myself. The inability to accurately see the image reflected in the mirror or a photograph. The brain is a powerful organ and I can only think that in some primal mechanism of self preservation or attempt to keep the status-quo, it gave me a more palatable image in my brain to look at than what was actually in the mirror or photograph. It is only now that I see the discrepancy in the image because I am not that size anymore. For me, it is a scary prospect that my mind is essentially playing tricks on me.

So how do you over come these powerful mechanisms of the mind? I can only tell you what worked for me in the beginning. First is was being brave enough to look at the real data on the scale; my weight, BMI & body fat percentage. Looking at the numbers, they tell the tale of my past actions. Then, looking at what the numbers should be, for a healthy person, based on medical charts for age and gender, I got an idea of how far apart they were. I then decided to be the healthiest version of ME and not subscribe to some other ideal or image, that I was never going to be. It is difficult to do, to be honest with yourself. But living an honest life is healthier and makes you happier in the long run. My first goal was to reach the high end of the normal range, for body fat percentage given my age and see where that took me. I am still working on it, but I can tell you, while I may not accurately see the image in the mirror, I am feeling better about myself and where I am heading now that I am looking at the data.

Each week I email my latest blog. A guide to living a healthy lifestyle and interesting ideas. Occasionally a healthy challenge. No commitment, unsubscribe any time. We don’t spam or sell your information.